Chaparral snags overtime win at Hamilton in reintroduction to 6A

Chaparral football jumped up to 6A this season and has already put its stamp on the conference, winning in dramatic fashion 36-33 in overtime at Chandler Hamilton on Friday.

"Welcome to 6A!" shouted coaches after their team rushed the field to surround wide receiver Marcus Norvell II in the end zone.

A throw from quarterback Jack Miller to Norvell on third and 10 sealed the win for Chaparral, which needed to at least match a Hamilton field goal to stay alive.

It was a tight game throughout, and momentum seemed to be in Hamilton’s favor in the second half, before Chaparral tied it up on a field goal with 1:21 left to play.

For first-year Chaparral head coach Brent Barnes, the back and forth didn't matter after his team got the win.

"That's not how you draw it up," he said. "But our guys believed, and they made a play."

His players echoed the sentiment that a win's a win, especially for a new coach.

“I think that feels great and it looks good on paper," wide receiver and kicker Tommy Christakos said.

Norvell's 10-yard touchdown may be what the team and its fans remember, but it was Chaparral's resiliency throughout the night that allowed that play to happen.

Late in the third quarter, Hamilton forced Chaparral to go three and out on a series that would seem to put momentum solely in the home team's favor.

Chaparral started at its own 20 with 1:46 in the third. On the first play of the drive, Miller dropped back and was nearly intercepted by Jonathan Damore. 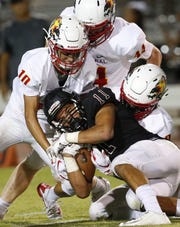 Next, Miller would hand off to running back Darvon Hubbard, who had a 57-yard touchdown run on Chaparral’s previous drive. In this instance, though, Hubbard would be stuffed by multiple Hamilton defenders, losing a yard in the process.

On third and 11, Miller found Christakos on the sideline. So did Hamilton defensive back Isaiah Blanco, who made immediate contact. Blanco had a crunching hit on Christakos that was so hard, it knocked the ball out, rendering Chaparral incomplete.

It was just one highlight out of Blanco, who terrorized the Chaparral defense throughout the night.

A low snap to Chaparral punter Devon Roe would be the dagger in this drive. Roe took a knee, downing the ball at his own 2-yard line.

With momentum on its side, Hamilton took over in the red zone and needed just three more seconds to convert. Parson ran it in to put Hamilton back in the lead, 30-27, with 0:42 left in the third quarter.

Despite the quick change in lead, Chaparral didn’t flinch.

“Last year there were times when just everybody would be dead, dead tired, but this year, we keep it up – energy, energy. Keep the head up,” Christakos said. “When you have energy, you can make plays. And it’s just all mentality.”

Though the final quarter would see just one field goal, the main theme was each team trying to deflate the other. Hamilton would have some silencing sacks, including an eight-yard loss by Derrick Porter that made it fourth and 25, forcing Chaparral to punt. Chaparral would answer with an interception from Kamdan Hightower, his second of the night, two plays later to get it right back.

Hamilton waxed and waned with its quarterback, Brandon Schenks.

Schenks’ play was up and down throughout the night. The Air Force commit looked electrifying early on, putting Hamilton on the board first with a 65-yard run on Hamilton’s first possession. He would scramble throughout the night, sometimes picking up the first down, but often taking hits along the way.

Perhaps one series summed up his night the best. On the first play of the second quarter, he nearly dropped the snap, briefly recovered, only to nearly throw an interception. The senior quarterback seemed quite shaken up. He was able to walk off the field on his own accord, only to drop down on the sideline. Still, Schencks was only sitting for about a minute before he bounced back up.

Schenks would miss just one play, running back on to the field with 11:42 left in the second quarter.

On third and nine, he dropped back in shotgun and found a wide open Brenden Rice in the corner of the end zone for a nine-yard touchdown.

A few times throughout the night, Schenks did seem a little more tentative, but there were no other signs of a lingering injury.

There were times he would lob it up into double coverage, only to bounce back and come up big on third-down conversions throughout the game.

Quote of the game

"I feel great. All I can do is thank my teammates and thank God for this big play," Norvell said of his game-winning catch. "This is the play on the line, and I have to make it."