For college football junkies, here's a guide to Friday night's Arizona Republic high school Game of the Week between Saguaro and Chaparral at Chaparral and top players to track.

The Republics top 2022 prospect in Arizona. He made a second cut of major colleges pursuing him with his seven finalists being Alabama, LSU, Miami, Notre Dame, Oregon, Texas A&M and USC. He's a freak athlete who plays offense in certain packages as a tight end and a slot receiver. Incredible skills. A tank across the defensive line with his ability to play over center and on the edge. Saguaro may have to game plan around him. 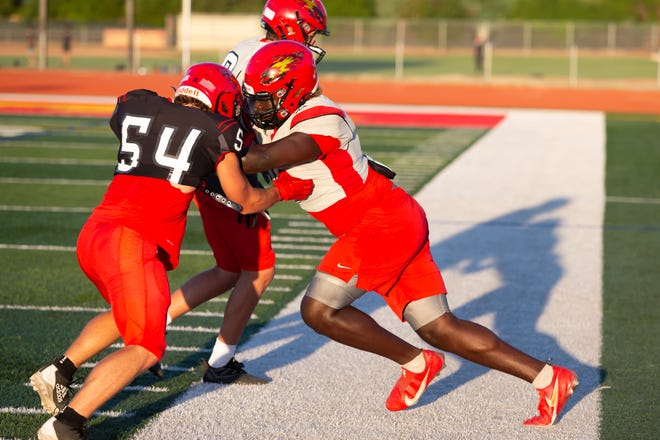 The most under-recruited quarterback playing during his senior season since Brock Purdy (now with Iowa State). He is averaging 306 yards passing through the first three games, leading all 6A quarterbacks in passing yards. Not shy of the spotlight. Rises big in big games.

He is the brother of former Arizona Cardinals safety/linebacker Deone Bucannon.  Long, strong, athletic cornerback who has offers from Northern Arizona and Idaho. He's likely to get bigger offers as the season progresses if he continues to show the ability to lock down big, physical receivers.

He's got Power 5 potential. He just needs more game film. Tough, strong off the edge. Has 10 tackles in the first three games.

He has eight pancake blocks in three games. He's got potential to be a Division I offensive lineman.

He's become the team's premier tailback with the graduation of Jared Williams. While Willams would run over defenders, Ashby-Phan relies on quickness and speed to get through holes and make big plays. He's related to former Chicago Bears great Gale Sayers.

No Division I offers, but he might be the discovery of the season through the first three games. Versatile athlete who can dial up big plays as a receiver and a running back, he is the nephew of former Phoenix St. Mary's multi-position star Jim Sanson, who went on to play at the University of Notre Dame. He's some of Sanson's skills set, except for the kicking part.

Committed to Arizona. Flexible defensive end who can play outside linebacker. Explosive off the edge. Started to really come on near the end of his sophomore year with a big game against Chandler Hamilton in the Open semfiinals.

He can do it all for the 'Cats, play running back, receiver, safety and return punts and kicks. Find a spot and he'll make a play. A very good baseball player, too.

Good size, arm, accuracy, he's come in as the fulltime starter this year and has led his team to a 2-0 start, completing 71% of his passes and throwing two touchdown passes. Great leader.

Big arm span, can play center and guard, he's the anchor to a tremendous offensive line. He is committed to the Washington Huskies in the Pac-12.

He has offers from ASU and New Mexico. Good athlete. Can play defensive line. Can get out and block down field.

Lock-down corner has offers from Arizona and Florida State.

Can play corner and safety, he's off to strong start with eight tackles and has returned a punt 23 yards. Has been offered by Syracuse.

Only a sophomore, he has offers from Arizona State and Arizona. He leads the team in rushing with 168 yards in just 16 carries.

Another sensational sophomore who is on the Power 5 recruiting radar. Has an offer from Arizona.

To suggest human-interest story ideas and other news, reach Obert at richard.obert@arizonarepublic.com or 602-316-8827. Follow him on Twitter @azc_obert.